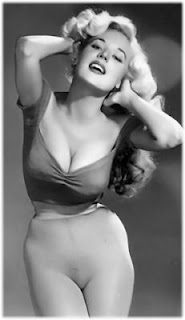 Betty Brosmer has been called the definitive cheesecake model of the 1950's, and I believe it is a title well deserved. Amazingly she did so without ever revealing more than you would see at your local beach. She has a certain charm and glamour that set her apart from pack. (not to mention an 18 inch waist, wow!)

Betty was always skinny, and at the age of 11 to build up her body her aunt sent her a weight set. She had received the men's weights instead of the ladies, but decided to use them anyway. Evidently it didn't hurt, because she received her first modeling job in Sears and Roebuck catalog at the age of 14. It was visiting that same aunt in New York in the summer of 49, that met her up with top studio photographers. Those pictures where posted in Life and Time magazines as an Emerson television add.
Betty came back to L.A. around 1950-51 to pose for artists Alberto Vargas and Earl Moran. The Vargas family was very kind to her. Vargas and his wife having no children even wanted to legally adopt her.
Then it was back to New York to finish her school at Manhattan's George Washington High School. While still in school Betty received a job modeling in Blackouts at Broadway's Palace Theater. Establishing herself as a commercial and fashion model in many catalogs on the behalf of many products. All before graduating. 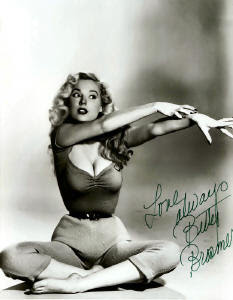 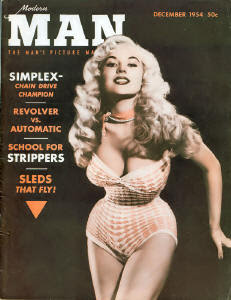 She really went big shortly after starting college, when she met up with the famous glamour photographer Keith Bernard. At first the money was good, she was making 100 to 200 dollars a day most girls only got 50 to 75. Unfortunately the contract gave Bernard exclusive rights to shoot pin-ups of her, which greatly limited her at that time. Bernard was even known to turn down work that was offered to Betty, because the contracts where so lucrative to her. (go figure?)

From 1955 to 59 Betty appeared in virtually in every top-quality men's magazine from Modern Man and Cabaret to Fling and Night and Day. She was even asked to pose for Playboy magazine, when they got word from Bernard that she would do semi nude photos. She did a photo shoot with Arthur Paul for the magazine, but the pictures where never put in Playboy due to the fact she never did pose nude for them. 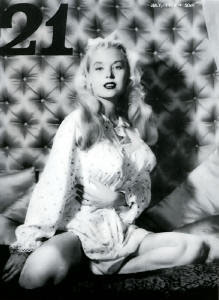 April 24th 1961 Betty Brosmer married Joe Weider, and was forever known as Betty Weider. Betty had known Joe and had been his favorite model in his magazine Beauty and Figure She would later become a role model for a generation, appearing in many fitness magazines including Muscle and Fitness. She was often seen advertising fitness products, and did a monthly column in Shape magazine called 'Body by Betty' and 'Health by Betty' She can even be seen in the 'Pumping Iron' and Pumping Iron 2'.

To this day Betty remains a model of fitness, and Beauty. She maintains an incredible history and a more incredible figure.
Posted by Ric at 12:36 PM

Well, in all my years I never saw a woman with such a beautiful body or more pleasant face. She was Before her time with her exercise regimen, and fortunately photographers in the staid 1950s didn't shrink from showing her to the best advantage: many of their shots leave little if anything to the imagination. In choosing a follow-on career in health and fitness she has benefited us all.

She is so beautiful and her body is the best ever.

the perfect body have never seen one as good