Jayne Mansfield
(Larger than Life)
"I like being a pin-up girl. There's nothing wrong with it."
Born Vera Jayne Palmer at the whopping weight of ten pounds in Bryn Marr Pennsylvania, Jayne was big at birth and bound to be big in life.
Things started fast for Jayne, developing her figure at an early age, and gaining attention from the boys. Getting pregnant while still in High School at the age of 17. Quickly marrying her boyfriend Paul Mansfield, Jayne completed high school, and shortly there after gave birth to her first daughter, Jayne Marie.
Paul got drafted in the Korean war and in his absence Jayne attended acting schools in California and Texas. All the while taking advantage of military and campus beauty contests and art modeling projects which didn't always sit well with her husband. While Jayne made a few Hollywood auditions, and started the pursuit of her acting modeling career. Paul started to feel distanced, and asked her to make the career or marriage decision. Jayne chose the career, and quickly became a notorious party crasher, at swanky Hollywood events. 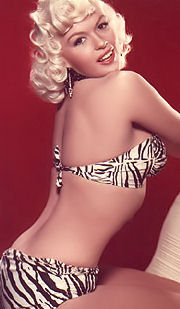 One thing that sealed Jayne's stardom was her dogged determination. She was once quoted as saying. "Ever since I was a little girl I was convinced I would be a star. I haven't got there yet, but I will. It's 80% determination and 20% talent." Using this plan, Jayne took every job, entered every pageant, and pulled every stunt that was available to her. In her later years she would be tagged as a show boater, and shameless self promoter. Some even accused her of staging a terrible boating accident and stranding, as a stunt for publicity.
Hard worked paid off, Jayne made a string of appearances in movies around 1955. Strangely her first big break was not in Hollywood but in New York city, in the Broadway play 'Will Success Spoil Rock Hunter' Critics loved her great comedic timing, and incredible figure.
On May 26, 1956 Jayne was attending a Mae West show when she met her love Mickey Hargitay, the 6' 2" 245lb Mr. Universe of 1955 . He was one of the muscle men that was in Mae's show. Mae West was a notoriously possessive and jealous woman, when hearing of Jayne and Mickey's romance instructed Mickey to publicly announce his love for Mae. At the press conference Mickey did the opposite and proclaimed his undying love for Jayne Mansfield, and was promptly knocked out of his chair by another one of Mae's muscle men. 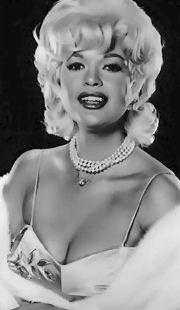 20th Century Fox, sought after Jayne at this time, and though they were a little wary of her publicity antics she was hired on and given the star role in the Film version of 'The Girl Can't Help it'. Shortly thereafter the movie version of 'Will success Spoil Rock Hunter' with Tony Randall was made. Those two films are the best of Jayne's work both of them were comedies that played off of her well endowed features. Later Tony Randall remarked that Jayne played a caricature of Marilyn Monroe that became an old joke very fast, and which very soon became a tragic joke.
After her Cinematic climax of 1956 1957, Jayne fell back in to shameless self promotion. Some efforts were legendary, and some were forget ably embarrassing. Her most famous stunt was the welcome to California she extended to Sophia Loren at the Romanoff Room in Hollywood, to commemorate her first big American film. Jayne went to Sophia's table with the press at hand, and congratulated her on her success, while meanwhile dropping her cleavage in Sophia, and the Camera's face. The pictures are classic, Jayne in all her glory while Sophia looks as if she doesn't know what to say.
The comparisons to other actresses and models went on and so did the bosom battles of who had the largest figure, and the most ample talents. Sadly the work and caliber of movies she received were ever diminishing in quality and quantity. It seemed the caricature was wearing thin.
Jayne Star slowly fizzled, she performed more and more poor career choices. She posed nude for Playboy numerous times, each time revealing more, and did a nude movie scene which was very risqué at that time. None of them seemed to do anything to stop the downward spiral. She broke off her relationship with Mickey Hargitay for Enrico "Boom Boom" Bomba a film producer in Rome. That did not last long nor help her career.
At 2:15 am on June 29th 1967 died in a car accident on the way to New Orleans. Jayne Always lived larger than life and after that point she entered the realm of Cult Super Stardom. She lived an incredible life of lavishness, driven by her desire to be a star. 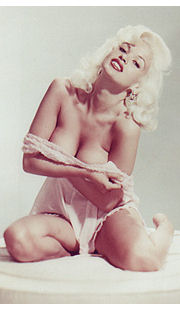 "If you're going to do something wrong, do it big, because the punishment is the same either way."
Hope you enjoyed the bio I providedwrite me at ricandrews@msn.com, if you would like to talk about Jayne Mansfield, trade pictures or add info to this site, thanks Ric
Posted by Ric at 2:54 PM